My favorite specialization in the CG world is rigging.  Watching the characters come to life when you create digital bones and joints, attaching a controller, and then creating the skin deformations.  From there you get to see the animators do what they do best, create the acting of the characters.  I was challenged with creating a rig for a character that has more than four legs and I chose to do a Tarantula!  I am not responsible for creating the model,  I found the model on sketchfab!

To start my rigging process, I did a lot of research on the tarantula anatomy and looking at how they move.  I also looked at how other people rigged spiders and tarantulas to see their approach.  Did you know that tarantulas are considered to walk on 8 legs but when they are little they actually walk with 10 legs?  Tarantula's have what's called a pedipalp that they use to grab their prey with but then they are little, tarantulas use it to help them walk.  Sometimes when they get older they will still use them for that purpose.

Tarantula Reference
To really begin my process, I had to do a lot of research on how tarantulas move besides looking at anatomy.  I also asked many animators what is the first thing you would do to a rig that has more than four legs?  The answer I got was that they would check how the legs react to how the body moves.  Knowing this I knew that this rig had to be very much IK built in each of the legs and the pedipalp.  To start the rigging process, I began with cleaning up the model and hiding all of the legs and fangs until all that showed was the torso and the tail (abdomen) 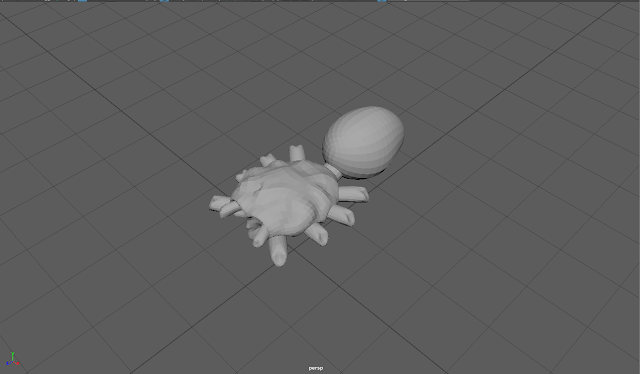 ·         To start the rigging process I placed my joints in the model and then from there I began to build and think about the functionality.  The torso on the tarantula is made up of a simple FK chain that has a clean hierarchy that allows it to move smoothly. The animator should be able to manipulate the torso by translation, rotation and scale. The orientation of the joints for the torso is ZYX 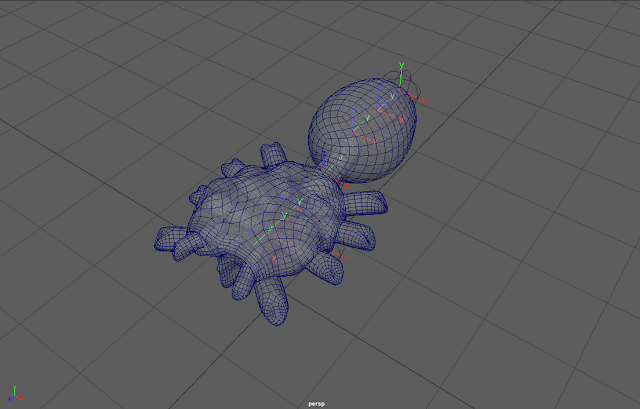 Tarantula Body Joint Layout
From there I had to think about the hips and the tail(abdomen).  Because I wanted to create a game rig, I needed to connect the root joint but still have the ability for the animator to move the abdomen.  To created this, I have two joints right on top of one another with the hip joint (the one that controls the abdomen) parented under the joint the root is connected to.  I also began to think about the orientation of the joints.  The above image is before I changed the abdomen to XYZ. 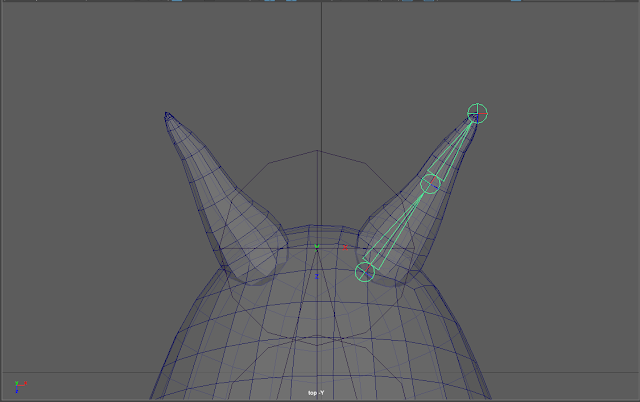 Tarantula Spinnerets joint Layout
Next, I worked on the Spinnerets and the fangs.  I created these to be simple FK chains that allow the animator to translate, rotate, and scale them.  In order for them to move I had to parent them under the joint in the parent chain that was closest to them. 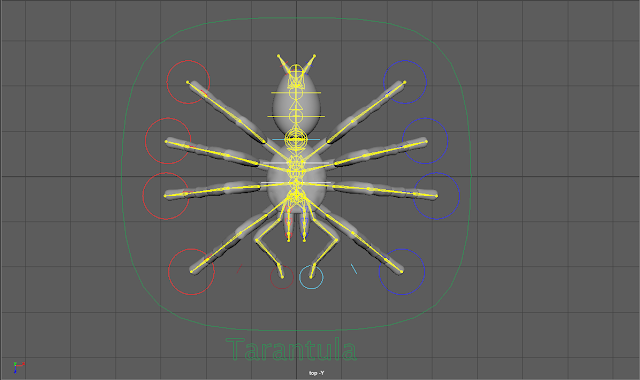 Top View of Tarantula Rig
There is a total of three different hierarchies working together inside each leg to get it to work correctly.  The simplest hierarchy is the skin joints which are physically connected to the torso joints.  Both IK hierarchies are intertwined and there is a group for each IK leg (you will find them under the ctrl group) that is then in a bigger group to keep them organized and easy to maintain. As there is 10 of these groups I created an even bigger group that holds all of them so that they are easy to find.  If you look under a group called Leg_rigging you will find all 10 of these groups that holds all the IK legs. To find the Leg_rigging group it is under T_root_jnt.  To describe how the legs are intertwined, the ik leg has the first pole vector that goes from the pivot joint all the way down to the ball joint.  This pole vector is then parented under the anim controller so that the leg can be moved around.  The ik rig leg has two pole vectors that control the knees and the ball.  The pole vector for these are then parented under the ik leg group under the ball.  This is what intertwines these two legs.  To get this to connect to the skin joints, I took the joints from the ik rig leg and point and orient constrained the skin leg and this allowed them to all move and work together.  I have never tried this before and I was inspired to try this from several different rigs I saw and messed with.
at January 05, 2021 No comments: